A CL Signature is a signature scheme developed by Jan Camenisch and Anna Lysyanskaya. This scheme has some properties that make it ideal for use in an anonymous credential system and is, in fact, the scheme that Sovrin, and I am sure others, currently use. In this post, I will try to synthesise my current understanding of this scheme, including a look at how Sovrin uses it in practice.

Note: this is just my current understanding, please correct me if you notice any errors or miscommunicated concepts. For the more adventurous, these are the three papers I recommend reading: 1, 2, 3. It is also worth taking a look at the idemix protocol specification, which was designed by IBM Zurich as a specification for an anonymous credential system.

The Properties of CL Signatures

The idea behind an anonymous credential system is that an entity interacts with other entities using different unique pseudonyms for each connection (or at least for some connections). However, when a credential is issued it needs to be tied to the entity as a whole rather than to the pseudonym with which the entity is known by the issuing party. CL signatures allow for control of credentials to be tied to a master secret known only by the entity, meaning credentials issued across one connection can be proved across another without loss of privacy through the linkability of pseudonyms. As a credential issuer only ever sees a commitment to the master secret, which can be randomised, they learn no information about the secret. A possible downside to these systems is that if a master secret were to be compromised then all credentials could potentially be stolen. Research is currently exploring making these systems more robust through the social recovery of keys and other mechanisms.

A credential is made up of more than just who is in control of it. A credential like your driving licence has your name, DoB, address etc. To make this signature scheme usable for credentials the scheme needs to enable signing blocks of messages. In an anonymous credential, each message block represents an attribute. Rather than amalgamating these message blocks into a single message using a collision-resistant hash function, CL signatures enable a useful feature - effectively signing each of these message blocks in turn. This means that any subset of these attributes can be presented along with a valid signature, allowing for much more fine-grained, privacy-preserving credential presentations than in the physical world. 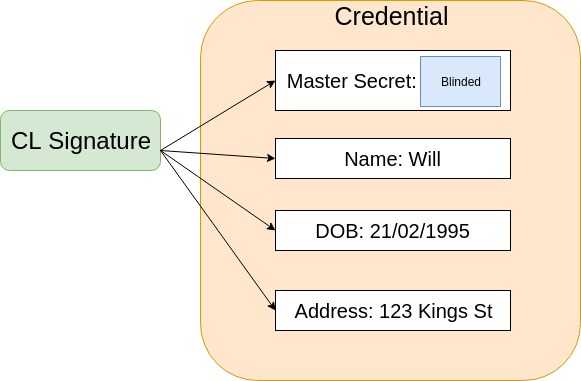 Zero knowledge is used in the creation of CL signatures. As CL signatures are typically created by two parties, one committing secret information for the other to sign along with some other visible messages. This is certainly the case in anonymous credentials. Zero-knowledge proofs are used to establish trust between the two parties that their secret parts of the signature are done correctly. 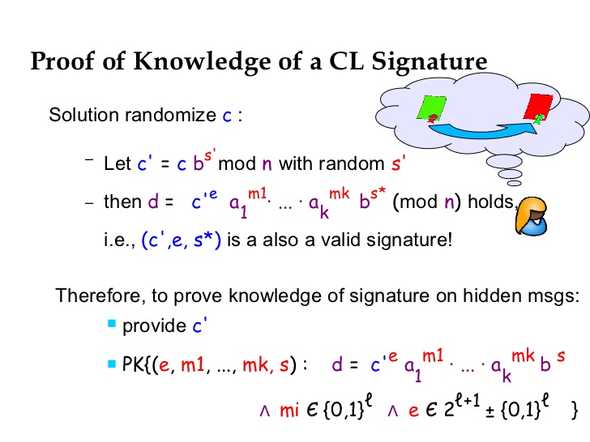 The receiver of the signature creates a Zero Knowledge proof of knowledge that they do indeed have knowledge of the secret information they are committing to the signature. In anonymous credentials, they also prove that the master secret they are committing to is the same one used to generate the pseudonym they are known by. They send this to the issuer along with the committed secret information. This is then easily verified by the issuer before they create the signature.

Looking at this code in combination with the indy-crypto Rust code which is designed specifically for the anonymous credential use case helped me helped me to further clarify my understanding. You want to look in the libindy-crypto/cl/issuer.rs && prover.rs files. Here you can find the code relevant for issuing a credential. For a full example of the workflow to issue a credential look in cl/mod.rs. Here you will find tests such as multiple_predicates() running through the issuing of credentials.

The workflow seems to be:

I have skipped over some aspects such as credential revocation, but I think this is a great place to start for anyone looking to understand how CL signatures are used in anonymous credential systems.

If you have any questions, feel free to drop me an email.